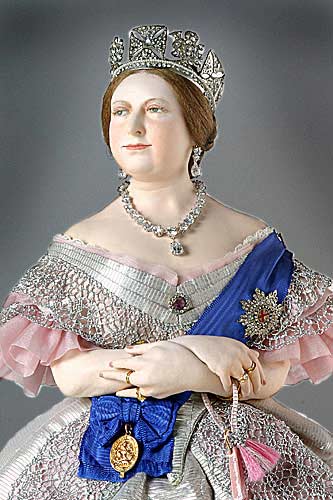 Such fulfillment is seldom attained.
AKA
Queen of the United Kingdom
"The Grandmother of Europe"
Group
Historical Figures of England
Personalities of the Lincoln Era
Born
1819
Died
1901
Portrait Year
1860
Portrait Age
41

For twenty years Victoria reigned with the capable Albert at her side. The queen’s relationship with a series of weak ministries was not always smooth.  The policies of Lord John Russell were widely blamed for exacerbating the severity of the potato famine, which killed a million Irishmen. The industrial revolution had swept the kingdom, generating great economic wealth for the country and its colonies. Victoria was the mother of nine. The good times for Victoria abruptly ended when Albert died of typhoid in 1861.

During the 1850s, England was importing vast quantities of Southern cotton to feed the growing textile industry in America. When civil war broke out in the U.S. in 1860 and Union ships blockaded southern ports, export of cotton all but stopped.

Queen Victoria had harbored some sympathies for the South.  When her opinions became known, her husband Prince Albert strongly cautioned her against any public support for the Confederacy, as it would imply the Crown was meddling in foreign affairs.

Later when a Federal ship seized a British vessel and removed two Confederate agents, there was an outcry in England against the Lincoln administration. Albert did his best to cool the war fever by rewriting a  declaration of war submitted by parliament for the Queen’s signature. War would have been disastrous for England and the USA. The Royals were never to involve themselves in “politics,” a hard constraint for Victoria.